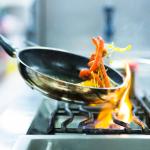 Food preparation was completely transformed upon the advent of Tefal and its infamous non-stick coating. It was invented by Frenchman Marc Grégoire who originally used a non-stick coating to make reeling in his fishing rod smoother. It was then his wife’s notion that the same non-stick concept could be applied to pans. Over time, Tefal has become recognised as specialists in creative cooking technology with Thermospot being one of their most recent innovations.